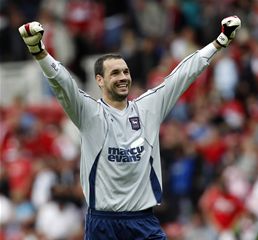 The 27-year-old goalkeeper signed from Sunderland joined the club this week and is set to feature in the squad for this weekend’s game against Middlesbrough.

Fulop joined Tottenham in 2004 and later spent time on loan to Chesterfield, Coventry and Sunderland before the 6ft 6in ‘keeper made his move to the Stadium of Light a permanent one in January 2007 after being snapped up by then Black Cats boss Keane.

Further loan spells followed at Stoke and Leicester with Fulop establishing himself as Sunderland’s No.1 in the 2008/09 season.

Earlier this year he had a brief loan spell at Manchester City after joining from Sunderland.

Capped by Hungary at U21, he made 21 appearances for his country at senior level.

Fulop’s arrival at Portman Road sees him link up with his international team-mate and close friend, Tamas Priskin.

Ipswich Town FC is part of the marcus evans group.