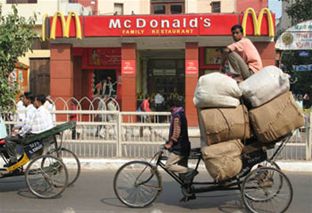 As a result of a robust economy, consumption habits have changed in India. Featured among Business World’s ‘Most Respected Companies of India’, one multinational establishing a firm foothold in the emerging fast food market is McDonald’s. The advantages of operating in a flourishing economy like this are many fold for the restaurant chain, explains Arvind Singhal, Director, South McDonald’s India (West & South).

Citing India’s strong economic growth with a GDP of more than 12% and with total retail sales expected to grow by more than 11% annually (BMI India Retail Report May 2010), Singhal believes this vast country offers much potential for retailers.

“With this emerging economy there has been a steep rise in the number of malls and other retail formats. This has proved to be a great advantage for us and formats like food courts could have been established. The infrastructure facilities have been favourable to us and we have been able to set up restaurants on highways, airports etc.  The emerging economy has resulted in growth of per capita income and global exposure of Indian audience which has proved to be a great advantage for McDonald’s.”

Offering the perfect ingredient for any industry – large disposable incomes – the Indian market has witnessed a marked change in consumption patterns, especially in terms of food, says Singhal.

“The household in middle, upper, and high-income categories have grown significantly. These households have higher disposable income per member and have a greater propensity to spend more. There has also been an increase in the number of dual-income households which has lead to more meals eaten away from home. A new breed of consumers in India – young, increasingly wealthy and willing to spend on everything from mobile phone to speakers to French fries - has been growing.”

More and more multinationals will be eyeing India as the effects of globalisation make it an attractive bet. “Today we stand in the era of global Indians, people are travelling across countries and adapting to more and more new tastes and cultural values. This has made the prospects even brighter for the multinational chains. We can see an evident change in the lifestyle of people here in , which is a result of the global impact on them. The infrastructure facilities in today are ready to accommodate the global standards in all aspects, which will surely help these brands to establish a better distribution network and supply chain. The foreign direct investment (FDI) norms today are a boon for the retail industry in India and have made it even easier for the international F&B brands to come in.”