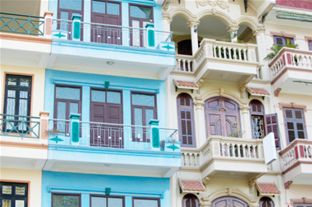 Defying the global slowdown, ’s economy is thriving and has the second highest growth rate of Asian economies.

However as Vietnam reaps the benefits of its new found success, the lessons of the 1997 Asian Financial Crisis are not lost on it. In addition, the recent global economic recession and the experience on regulating the real estate market of neighboring countries - especially in , and - are valuable reference points for addressing the problem of real estate bubbles and stabilising the housing market.

Maintaining a steady growth GDP pattern of 7% annually since the adoption of the Doi Moi and open-door policy 20 years ago, is gearing up into a new development period with a high acceleration.

With a GDP growth rate in 2009 of 5.2%, rapid urbanisation is taking place and Vietnamese cities are inevitably facing housing challenges in line with other global ‘tiger economies’.

“There are now nearly 25.5 million people living in urban areas and 46 million or more are expected in the year 2020. Like in other developing countries, ’s housing industry has become a major contribution to the nation’s economic growth. However we are aware that an overheated property market might have destructive effects on the economy. The oversupply of commercial housing, which is not affordable by the majority of households, may drive development companies to bankruptcy and a large of number of properties to remain unoccupied.”

Measures have been taken by Vietnamese government to stabilise the real estate market, says Nguyen. “Firstly, we are speeding up the social and low-cost housing program to quickly address low-income families’ housing needs. Developers have been requested to develop social and low-cost housing within their commercial housing projects. Secondly, the credit to commercial housing developers, developer’s equity capital requirement and restriction of credit growth rate of commercial banks to be put in severe supervision. Finally, since ’s housing finance system has not yet fully developed, the government started to set up the formulation of integrated housing finance system, like to develop secondary mortgage market, to set up the Housing Provident Fund, etc. to improve both housing production and housing consumption.”

In line with this urbanisation trend, there has been a large relocation of households from rural areas to big cities such as and . Accommodating the housing needs in such cities is a big challenge for the government in the years ahead, Nguyen added.

The marcus evans Affordable Housing Projects conference will take place in on 2-3 August, 2010.