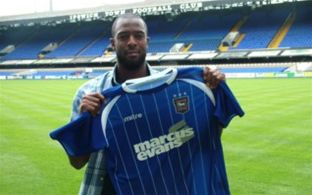 Striker Nathan Ellington has signed a two-year deal with Ipswich Town in a move that sees him reunited with Town boss Paul Jewell for a third time.

three games in his three years at the club before Wigan splashed out a club record £1.2m for him in 2002.

The Bradford-born frontman was a smash hit for the Latics and alongside his former Bristol Rovers’ team-mate, Jason Roberts, fired the goals that took Wigan to the Premier League for the first time in their history in 2005.

His tally of 59 goals in 134 League games persuaded West Brom to pay £3m for his services in August of that year. He scored 20 goals in 81 games in total for the Baggies before moving on to Watford in August 2007.

His fee of £3.25m was a club record for the Hornets and he made his debut in a win against Town but after a year at Vicarage Road he joined Derby on a season long loan.

Another loan move followed in December 2009 when he signed for Greek club Xanthi FC and he spent a year there before returning to Watford at the turn of 2011. He finished last season on loan at Preston.

Manager Paul Jewell added: “I’ve worked with Nathan before at Wigan and Derby and know his strengths. He has shown he can score goals at this level and will add to the competition for places within the squad.”