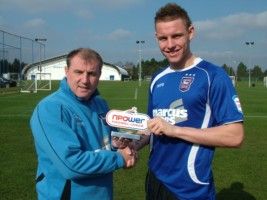 ITFC player Connor Wickham has been named Championship Player of the Month.

ITFC manager Paul Jewell heaped praise on the striker and said he has a lot of potential and has been making good progress.

“We’re obviously delighted for Connor. It’s been a good month for him with the hat trick at Doncaster and some very good performances around that,” Jewell told the club website.

Wickham scored a hat trick against Doncaster and another goal to help the win over Sheffield United.