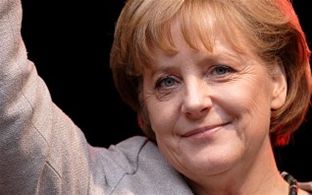 She has had to steer Germany through some difficult times but has proved her mettle as a serious leader running the world’s fourth largest economy.

Germany’s first female chancellor Angela Merkel has been held up as a strong and capable leader by Alison Smale, Executive Editor, International Herald Tribune. Smale was a speaker at the marcus evans Women Leadership Conference, in Prague, on 11- 12 November.

“I think she is a very strong female leader. She has proven remarkably able to navigate the extremely difficult fields of German politics and it’s a very male-dominated field,” Smale explains.

However, Merkel is very much in the minority when it comes to occupying a leadership position in politics.

Asked whether female leaders can be rejected because people feel they don’t have the necessary qualities for effective leadership, for example Hillary Clinton’s failed Presidential bid, Smale disagrees.

“The mechanics of why actually Hillary Clinton’s bid for the presidency failed - the reasons basically lie very much in the weeds of the way the political campaigns are conducted. I don’t think they have that much to do with the fact that she was a woman. That being said – yes of course leadership ranks are still very male. I think it sometimes is helpful to remember how relatively recent the push for gender equality and for women’s empowerment really is.

“Women in Europe especially push for quotas on boards. Because this hasn’t been going on for very long there simply is not the number of qualified women as there are qualified men. It’s extremely valuable to have as diverse an organisation as you can and gender diversity should be wired into the kind of structures that people try and create. The fact remains there are not as many qualified women as there are men for leadership posts. There does have to be a conscious effort to promote women just as there should be a conscious effort to promote people of different material backgrounds, different ethnic backgrounds etc.”

One of the most debated questions, according to Smale, is whether women possess unique capabilities that are a distinct advantage in business or is leadership the same regardless of gender.

“I do think that overall women tend to approach decision making and therefore leadership in a slightly different way. The problem with talking about this is that for every example you can bring you can bring a counter example. It again goes back to this point about diversity. You want your decisions to be of the very best quality. And they usually are when you have ensured that as many points of view as are relevant and you can muster are brought to bear on the conduct of whatever business it is you are engaged in. I think even female leadership may turn out to be slightly different and emphasises slightly different things,” she adds.